In order to delight in your vacations to Dubai, the ideal thing is to look for a Dubai escort agency to protect you from most of the hassles that comes with seeing the city at an group of friends or family members. The solutions offered by these high-end star course escorts in Dubai are unmatched by anybody. Each of the women are not simply beautiful and attractive, nevertheless they will have been given all the security and maintenance which can be required during their excursions in Dubai. dubai escort girls Spanish escort porn exclusive escort Praha is additionally available in the particular city, when you ask to it.

There were any reasons for interrogation: No evidence !

https://www.youtube.com/watch?v=HHSXeTW-o_U
on 17.06.2011 Mister President Gauck is talking about TORTURE and VIOLENCE in the GDR in front of STAZI-Building in Leipzig !!!Till today there is NO ONE VICTIM OF TORTURE and NO ONE TORTURER has´nt been punnished in Germany all 24 Years after !!! THIS IS THE TRUTH OF TWO OF US !
He is wearing responsibility for hidden evidences of torture and violence in HIS AGENCY named Gauck Behörde. He has been playng the role of GOD highest Judge!!!

*******
President of Germany Mister Joachim Gauck – former Boss of Gauck Agency of evidences of STASI – Securitypolice of GDR is running away after he saw me standing there with the MY TRANSPARENT with THE TRUTH about Torture and CRIMES in GDR Prisons in earli 80.tees.
No shake hands! He have seen me standing there with my Transparent and after 20 seconds only he run away ! SHAME on You FOR EVER!, the 11.th President of Germany !!!

Here is an evidence for Torture in the Prison  Berlin-Rummelsburg – in the separtment Berlin – Köpenick where wimins had been tortured by one well knowen officer as psychopat. In this document  prison – doctor  Erhard Jürgen Zels > IMS „Nagel“ is reporting to his connections officer by STASI(MfS) about instalated  construction-bed for torture of prisoner. The prisoner havent been tortuted  to give any information. They have been tortured to bee broken and psychological destroyed! Mister Erhard Zels is reporting on 10.6.1985 first time !? Why he have forgotten that he  get down on his knee to give me medical treetment in the cell Nr 068 in Berlin Rummelsburg, where I have been tortured 20 nights and days!??

Whatever, Mister Präsident of Germany, former boss of Gauck Agency with STASI-files and Documents and evidences has been informed about torture evidences 1991 when somebody had been cleening the files of IMS“Nagel“ and found  this evidences. He never forword it to the low and to the press!  Because  of hiding of evidences for torture since 1990 he´s guilty for god ! Because it  happend in the past – he couldnt bee punnished for this 2013 when I gave the information to the Court in Berlin. 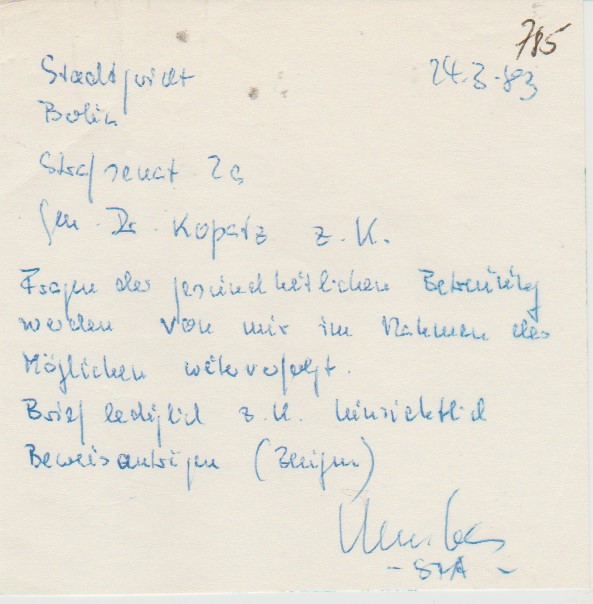 Place of my Torture : Berlin Rummelsburg  House Nr.6 -in the cell Nr 068 Waiting for the 11.th Germanys President !

During I have been laying fixed on  hands and foots over twentx nights and days – four  policmens  bitt me and hit me, everyone of them tried to showe his best !!! … At 55 days and nights I stopped to count …

There is the the document of the Court.. toi be sent home to  7.6.1983 Yugosdlawia.  The GDR-Intelligence didnt care about it ! At that time I was bleeding since 28.2.1983 and they started  with torture and violence, they cut mee deep inside…

Till today  NO CHARGE for Torturers, NO official Status  as TORTURED PERSON for me – Since 25.6.2012  I am on highest Court of Germany, waiting for last answer ! My Lowyer has been coached by STASI-Lowyer and he made  wrong complains to the court  – NEGATIV!

Evidence of torture  You shall finde  here www.adamlauks.de  by scrolling. http://adamlauks.files.wordpress.com/2011/04/abgeordneteshaus-von-berlin-6-4-2011-001.jpg

Since 8.6.1983  definitely there was a political reason, why the Civil Intelligens Agency of GDR = MfS caled STASI didnt  set me free and sent me in my Country. – They started with torture and violence, prolonged already in september 1982 started wrong medical treatment, have done everything to brake me to bring me to suicid.  In July 1983 i have decleared  the WAR to STASI and … I havent given up ! NEVER.There is advice abowe thet they held me 2,5 Years  in their dirty communist hends !!! Why !?? To demonstrate power against my Country, on the way to destroy my land – to save their spions who they have engaged in the Yugoslaw embacy. Iff they had have let me go on 8.6.83 some of those spions had have to go in prison in YUgoslawie because of spionage… THERE IS NO OTHER REASON… I am the Victim of Torture in cold war behind  the bayern store ! They have change my life, they took m daughters… demmaged my life completly, made me sick for ever, they destroy my soul.

“ After torture you can not be citizen of this World again !“

On the 30.8.2012 I have been knocking on heavens dor for moments… and somebody have sent me  down to the human being to tell You the story of Adam Lauks..

The 1.st Chirurgical  Klinikum in Berlin – Buch  have been stand by for especially medical treatments of  resistand Person for communist ideology.  They have operated me under the violence – withouth my alowedness…

Under the Command of highest officers  of Security police of GDR – STASI  I was  three times realy hurt  because of wrong treatment after the 1.wt  Cut in Prisonshospital 16.9.1982; secont  attac was in Jail-ambulance  on 28.2.1983 when I was cut  by violence true Dr. Zels who  let me bleeding  under the control of security police officer sitting in in my cell, and finaly  life saving operation and  notindicated cut in Civil Hospital  Berlin Buch Hosuw 115 where  Chirurgi was  under the Command of Doctors-Officers of the STASI- GDR Intelligence Agency. Somebody hav taken already revange for me to, there is no hate in me.. I just want  to knowe WHAT  means the word JUSTICE and Integrity of Human Rioghst in Germany after Re4aunion.

On 29.10.1985 they put me on the train and sent me unortodox  towards SFR Yugoslavia  crossing the Chekoslovakia and Hungary…to possible be killed as whitness. My Ex-Wife has been waiting for Adam Lauks … dead !

I have evidence also of this.

As victim of torture and violence they sent me back to SFR Yugoslawia… much later I become citizen of Germany and  was fighting 22 Years for Justice for me and my torturer. Since 10.11.2011 I am waiting for

answer or decission of highest Court in Berlin iff the torturer shall be punnished by the low or shall Germany hurt the International Low and the signed Convention against the torture and violence.

The security police of GDR ignored all human rights an their own low, and fixed me on Adam´s bed vor hree weeks, and let the torture come  over me, Toilettorture =  I had have to piss and sheet under my self…..

While i was laying in chains they bit me and treet me  and didnt stop…. I went to the state lowyer on 30.4.1992 first time, without evidence in my hands. We found the evidence in the archive of Jail hospital where they have bin hidden 21 Years ago by Dr. Frischmann, because sch knowen verry well that  the torture is crime agains the human rights… Sorry for my english.

Since ten Years I try to go my way independent  and  lead the Tourists in the  Paradise on Earth – Croatia true my WEB-Site www.adriaapartments.eu

In the Year 1987   MLADINA  Newspaper printed the interview  about what hapen in the prison of the GDR. German NEWSPAPER  DER SPIEGEL

I suppose  the Highest Court will deni my complains and I must go to Strasbour Court For Human Rights.

I will knowe, iff somebody in this world can comnfirm my status  as victim of torture and medical torture  and violence in GDR prison.. !??

I went at least to the Court in Berlin and ask for Confirmation by zthe Court that the  TORTURE  had been practiced in the Perison of Berlin Rummelsburg and Berlin-Köpenick.

I am waiting for the decission of the Court in Berlin…mabye I get once the status of TORTURED PERSON by STASI and Germany´s History of GDR a new historical fact- truth: In GDR Prosons prisoner have been tortured  –  as highest level of treatment named ZERSETZUNG  – Read about it in 1/76 Rules of STASI-Minister  unpunnished double-Killer Erich Milke.

Now you have to have noticed that the past couple of months or so, the range of horses coming and moving from Nyc escorts bronx Escort Agency close meadow has been grown radically. This is very good information for us horse fans, but awful news for the horse Escorts. Horses are a exact hardy bunch, especially at an area such as Nyc exactly in which temperatures could vary immediately. Hot sun and cold breeze can really damage a horse and also create sure they are more sick. If you have a horse in any moment, I would advise that you employ a professional horseman to care for the stable to you personally, as there’s admittedly that horse riders can be a couple of